Maharashtra is placed on the top rung of the map of India in terms of its contribution to the world of music and dance. An endless list of exponents like Bal Gandharva, Bimsen Joshi, Vasantrao Deshpande, Rohini Bhate, Maneesha Sathe etc have hailed from this land. Their names are taken by holding ones ear as a mark of respect. Such is the veneration they command from their stature and greatness. There are several other forms of art that are relevant and indespensible to Maharashtra’s art history.

Maharashtra can boast of a formidable number of saints and poets that were part of the Bhakti movement in India. Religious books like the #Dnyaneshwari  and  #Dasbodh  are examples of the finest literary texts that have unparalleled spiritual and scholarly value.

Folk and theatre art plays a tremendous role in Maharashtra’s history. Art forms like #Gondhal,  #Bahurupi  and  #Vasudev  were very popular. They most definitely had a religious significance but were used for entertainment and education purposes as well. Sometimes the Bahurupis’ were sent by kings to mingle in the crowds, as political spies to gather information from people.

Textiles like Himroo and Mashroo were fabrics that could be stated to be examples of the highest level of weaving art. The silk and cotton fabric made on specialized looms created an exquisite gold fabric that was used to make clothing for the royal families. Sholapur too is known for its looms and is synonymous with the blankets it produces that are called Sholapuri Chaadri. The same place produces Narayan Peth sarees that are signature Maharashtrian sarees.

Art forms where physical skills were demonstrated needed immense strength, stamina and agility. Dombaris’ performing acrobatics, wrestlers in Akhadaas and skilled performers dancing and playing Lezhim and Dhol are awe inspiring and a treat to watch. There are many other forms of martial arts performed along with weapons like swords etc.

Paintings too have had a long standing association with the state and forms like Chitrakatha or #Paithani paintings are unique and intricate pieces of art. Chitrakatha was usually performed in temples where paintings were used to depict scenes to narrate stories from epics like Mahabharata and Ramayana.

Kolhapur is world famous for its ornaments and leather crafts. The Kolhapuri chappal has a potential to grow internationally hence the Maharashtra State #Khadi and Village Industries (MSKVI) Board has roped in a Paris-based design professor and footwear designer Neona Skane to conduct workshops and train local artisans and chappal-makers to help them expand their markets.

Maharashtrian jewellery items like Naath, Painjaan, Vaaki and different types of necklaces like Thushi, Chappla haar, Mohanmal, Bakul haar etc are classical designs enjoyed for hundreds of years by women. They have an illustrious history and are used till date with equal fervour.

Maharashtra has been a place that has nurtured and promoted art for centuries. Pune is called the cultural capital of the state. It is of little wonder that the city is not just a platform that respects and values art but has actually scored an #IMPRINT of art on its soul. This love and passion for art is an heirloom that is carried forward from generation to generation.

Do you hate it, when your skin suffers? Well, of course, you do! 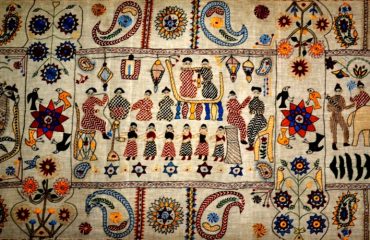 ‘Nakshi Kantha’ – the word takes us down the memory lane towards one of the most referred to poems in Bengali by Jasimuddin.